Why I love this part of Provence... 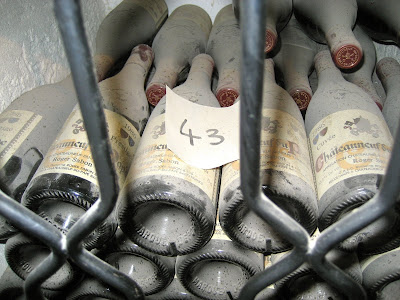 Its true that if you want a decent cocktail somewhere like the Hotel de Paris, Monaco might be your best bet; and if you`re in the market for a €6m house (who isn't) then as I write Peter Mayle`s place in the Luberon has just come on the market. But if you`re looking for the “vrai” Provencal experience rather than the glitz, then our “coin” – the Vaucluse – delivers in spades. To locate you, we are the most northerly part of Provence, with Mont Ventoux and the city of Avignon our most famous landmarks.

The mountain, known to the French as the “the giant” dominates the landscape, at 1900m it towers above the plain and appears to be snow capped in all seasons though in reality the summit is made up of a white limestone shingle that just looks like snow from down below. For the cyclist the ascent has iconic meaning – it’s the zenith of many cyclists riding ambitions every one of whom follows in the footsteps of the Tour de France greats - Lance Armstong, Eddie Merckx, and Contador have all won yellow jerseys on this stage. We are constantly surprised how guests with only moderate fitness levels are inspired to conquer the 21kms route. For Brits there is the added poignancy of the Tommy Smith memorial – Tommy was England's only serious TdeF contender, he died of a heart attack on the mountain in the 1967 race. There is a slightly bizarre – but moving nonetheless – tradition of “leaving something for Tommy”, an empty energizer can for example, so that at the end of the season the memorial resembles a giant recycling plant.

On days when the mountain feels like too much hard work cyclists and walkers should head for the the Dentelles de Montmirail, my favourite landscape of them all, around 20 miles of craggy limestone peaks rising majestically from hills at around 500m. This is truly stunning terrain – I once got held up for nearly an hour behind five brand new Ferraris on a photo shoot – its that sort of “film set” country with its terraced vineyards, olive and fruit trees and dramatic cliffs. In the centre is the Abbay St.Madeleine de Barroux, a working Benedictine monastery where the curious can drop in 6 times a day, from 3.00 am! to listen to the monks`s service with it`s Gregorian chants. Not far away is a shop where they produce and sell the most delicious olive and walnut bread and press their own brand of olive oil. The monks are of all of ages from around 18 to 70 - every now and again they are released to “randoneé” around our village of Malaucène. With a backpack each, loaded with baguette and picnic, you have never seen such a cheerful bunch as they profit from their release for the day.

For the dedicated foodie this is paradise indeed. The great Provencal markets of Carpentras, Vaison la Romain, Nyons and Sorgue present a visual and sensory feast – locally produced fare is what they are all about and our catering schedule at La Madelene is strictly tied to their seasonal calendar. starting with the Asparagus season in the first days of spring and progressing through strawberries ( the famous Carpentras variety), cherries, Cavaillon melons, spring lamb from Sault, and onto winter pumpkins, trufffles, ceps and girasol mushrooms and those fat juicy pomegranates we use to stuff guinea fowl. Restaurants are no less enticing. The mountain attracts serious hunting sport from local farmers and much of the produce ends up on the tables of our favourite places. One such is Entrechaux`s St.Hubert, a restaurant that has been in the same family - the Mourets - since the 1920`s. The family are delightful – in the Second World War they ran the local resistance from the restaurant here. Game and seafood is the house speciality. As I write the menu “formule” at just €38, a 4 course extravaganza plus ameuese bouche, features their legendary “Civet de Sanglier” (wild bore casserole). This is genuine trencherman stuff – served in a gigantic copper saucepan at a side table. When you`ve fought your way through the huge serving they help you to – and believe me this is super rich, thickened with the pig`s blood – there are two identical helpings left in the pot just in case you`re feeling peckish.

And to wash all this down with - why, in my view, the best wines in the world. The great American wine critic Robert Parker described Rhone wines as delivering “the best quality/value equation of any fine wine region in the world” He isn't wrong. Their reputation is based on robust spicy Grenache based reds and peppery violet scented Syrahs but there are also the summer fruit laden Tavel rosés, the fragrant viogniers and the almond and stone fruit white Chateauneufs that rarely travel outside the region. The latter village is a must see destination for the visitor: The centre of an often Mistral wind-swept, undulating plateau next to the Rhone the 300 + vignerons here fashion sublime, hedonistic wines – for sipping and contemplation rather than quaffing. The Chateauneuf brand is justifiably famous worldwide but the village itself is anything but affected – it’s an agricultural village where you are more likely to see tractors and trailers than tourist buses. They are however not without a quirky side: In 1954 they passed a law refusing to allow flying saucers (“cigares volontes”), a topical global concern, to land and disturb the vineyards. Apparently the law is still in place! All part of the Provencal charm...

Surprising and unusual sighting in the garden... 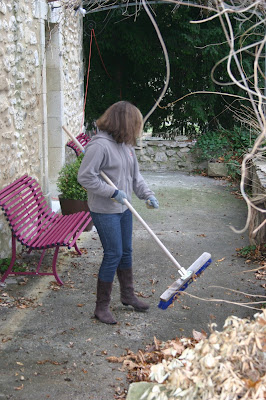 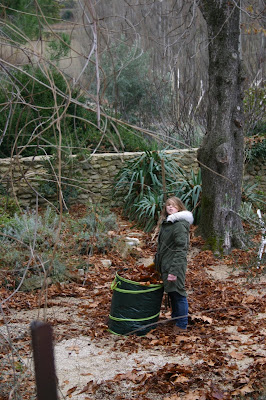 No not a rare bird of prey but Lily and her best friend here Maella helping to clear the leaves. Well done girls... 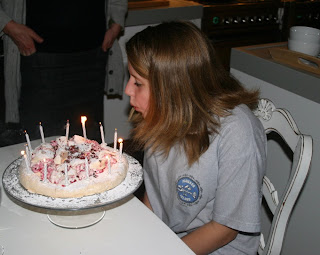 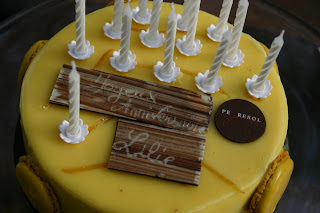 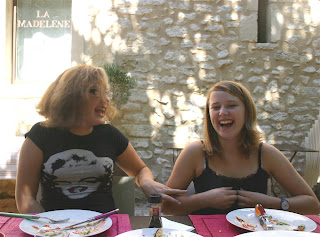 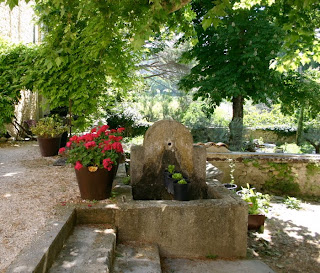 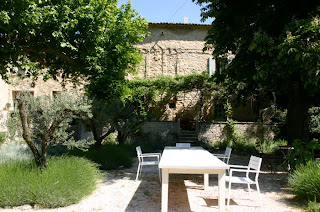 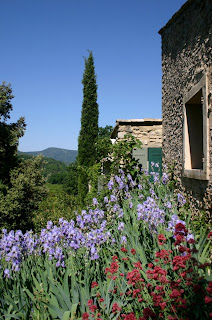 After a too wet spring...enfin we have glorious weather here again at La Madelene!
Posted by la madelene at 02:41 No comments: 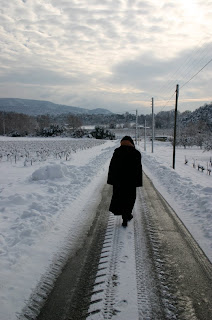 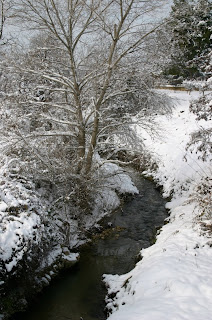 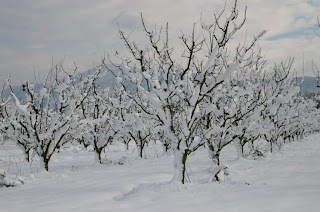 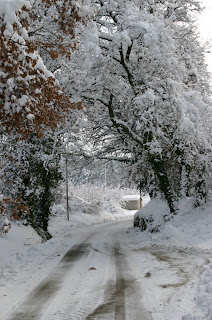 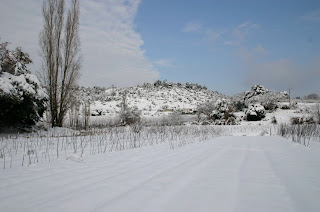 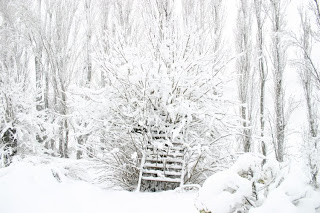 We have a white out here in Malaucene...as the old lady who I passed en route to the village said:"c'est jolie mais ce n'est pas practique"...too right, we have had a 40 hour power cut meaning no central heating or hot water since friday morning, and we cant get the cars out to the road...hence the shot of Jude on the long trudge into the village. Lily at least is happy...no school last friday and looks like we wont make it tomorrow morning. At least the fridge and the wine cellar are full!
Posted by la madelene at 09:03 No comments: 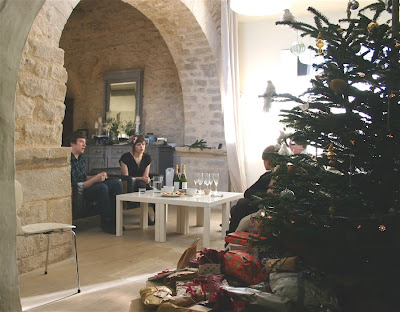 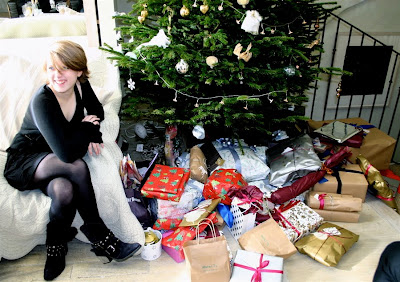 Happy New Year to you all....I hope you had as good a Christmas as we had, it was lovely to have all (or almost all) our family around us again.
Posted by la madelene at 03:58 No comments:

Feedback on our winter wine course... 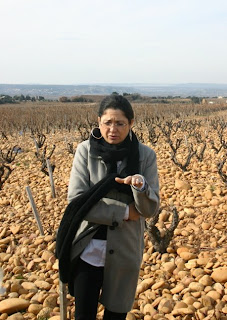 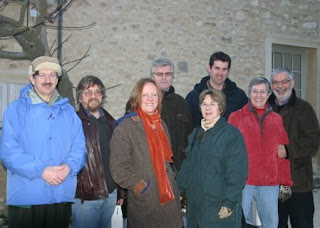 Images are 1. the group outside La Madelene, and 2. Karine Diffonty of Vatican nearly beeing blown off the Le Crau by a fierce mistral. The report from Mark Sullivan's blog:

Ellen and I joined a small group in a wine class. It was presented by Philip Reddaway, a British transplant living in Malaucène, a nearby village. Philip and his wife Jude run “Rhone Wine Holidays” (www.rhonewineholidays.com) from their 12th century home, formerly a Benedictine priory. Their longer wine tour packages include rooms, meals and wine education for the wine enthusiast. For three consecutive Tuesdays, we forced ourselves to taste wines from the area. The course included presentations by Philip in La Madelène’s atelier and tastings—in the atelier, at lunch and on-site at selected winemakers’ tasting rooms. Philip’s WSET certification and experience give him a knowledge of the wines of the area and the wine-making process. But he also knows many of the Rhone wine makers and selected from among many good ones to take us to some wonderful wineries. We tasted wine in some of the most picturesque locations we have seen in Provence. We talked with the wine-makers and, in several instances, went into the vineyards. We walked through the famous stone fields of “La Crau” in the Chateauneuf du Pape region and through mountaintop vineyards in Suzette and above Seguret. We met vintners who have embraced bio-dynamic production and have thus eliminated the use of herbicides. We enjoyed wonderful lunches prepared by Jude Reddaway at “La Madelène.” For the final Tuesday of the course, Ellen’s high school classmate and her husband joined us and our classmates. (Nancy and Tony live in London.) They got to go to Chateauneuf du Pape (www.domainedenalys.com & www.cuveeduvatican.com), back to La Madeline for lunch and then to the top the hill above Suzette to try some white wines and red wines from the high hills (www.domainestamant.com). I have included a picture from Domaine St. Amant. When we were at Domaine de Nalys in Chateauneuf du Pape, we got a tour of the winery. Different from the little wineries, the whole site is set up for tours (VERY clean & neat). Even the barrels have the Domaine’s shield carved into the oak. …and they make some fine wine there. At the second winery, we climbed into old trucks and went out to see “La Crau.” It is hard to describe, but think of a field of stones – a white stone like those you find on the shores of Michigan as far as you can see – and growing in this field of stones are vines. In the summer, the stones get hot – but reflect a lot of the sun, keeping the plants a little cool during the day and keeping the plants warm all night long. The clay under the stones holds moisture well, so the plant roots – which might go down one or two meters – find the moisture to nourish the plants and the grapes. The woman who was showing us “La Crau” had to shout in order to be heard above the sound of the Mistral which was whipping across La Crau at amazing speed. As Philip had mentioned in class, the stones are unique but also very difficult for walking and thus it can be hard to find laborers who will work the fields at La Crau (winter pruning, summer pruning, fall harvest, etc.) In addition to the sites that Nancy and Tony got to enjoy visiting with us during their five days here, Philip also took us to: Domaine de Mourchon (www.domainedemourchon.com) This winery is located at the top of the hill between Vaison la Romaine and Séguret – on the same route that Tish and I took when we walked from Vaison to Séguret. Chateau de Saint Cosme (louis@chateau-st-cosme.com) is located just at the north part of the village of Gigondas. The winery has been owned by the same family for 14 generations and they produce a wonderful Gigondas. Vincent Rochette runs Domaine Roche-Audran (vincent.rochette@mnet.fr), a winery started by his grandparents. In the past few years, he has switched to a “bio-dynamic”
Posted by la madelene at 23:44 No comments:

Check out our other websites 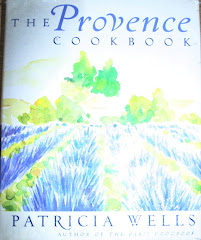 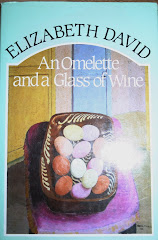 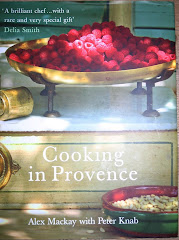